I have mixed feelings about this part of the country. Always have. 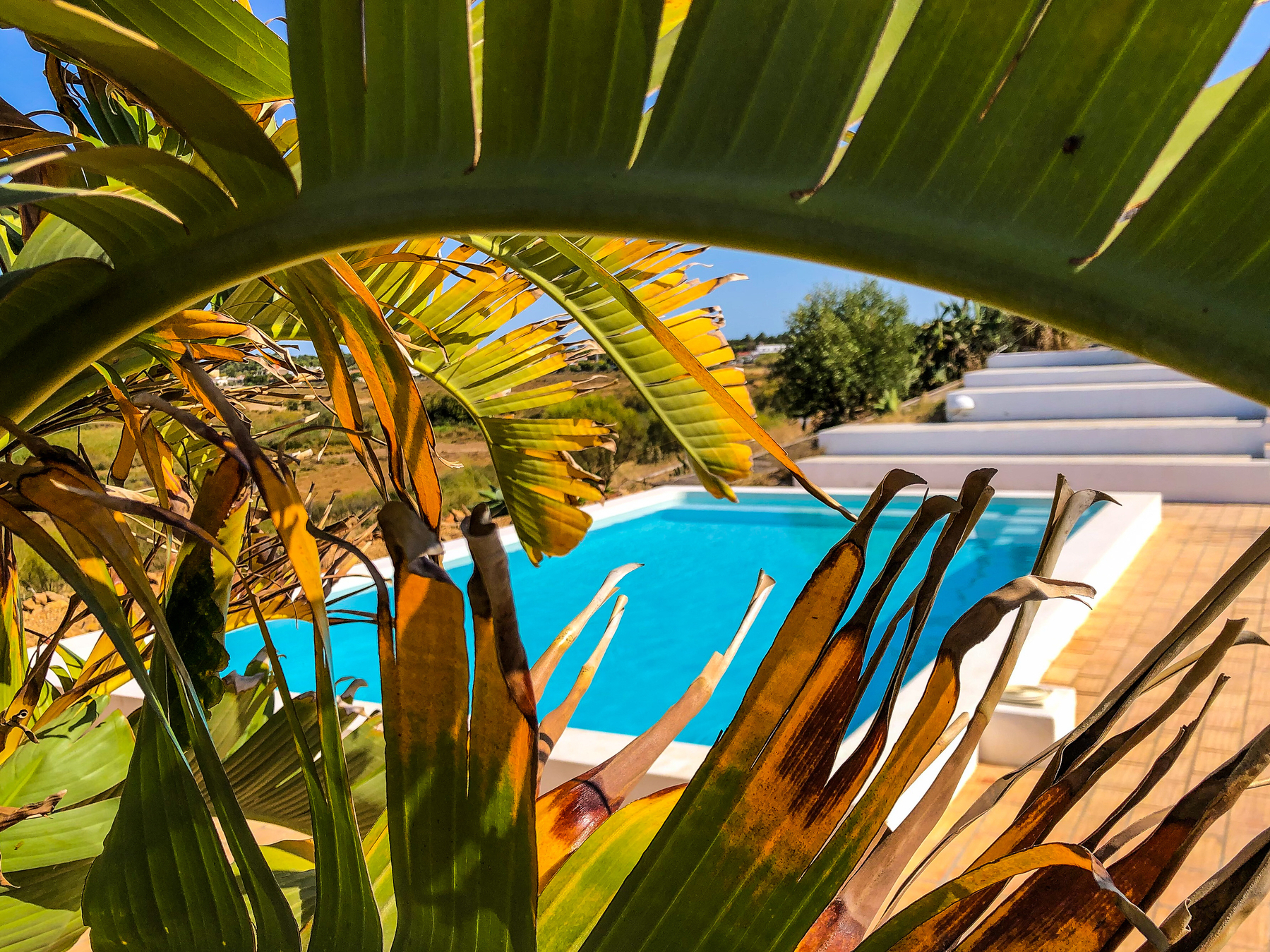 On one hand it’s beautiful, has amazing beaches, the weather is always nice, awesome food is available everywhere (although you have to look for it), and the people can be really nice. 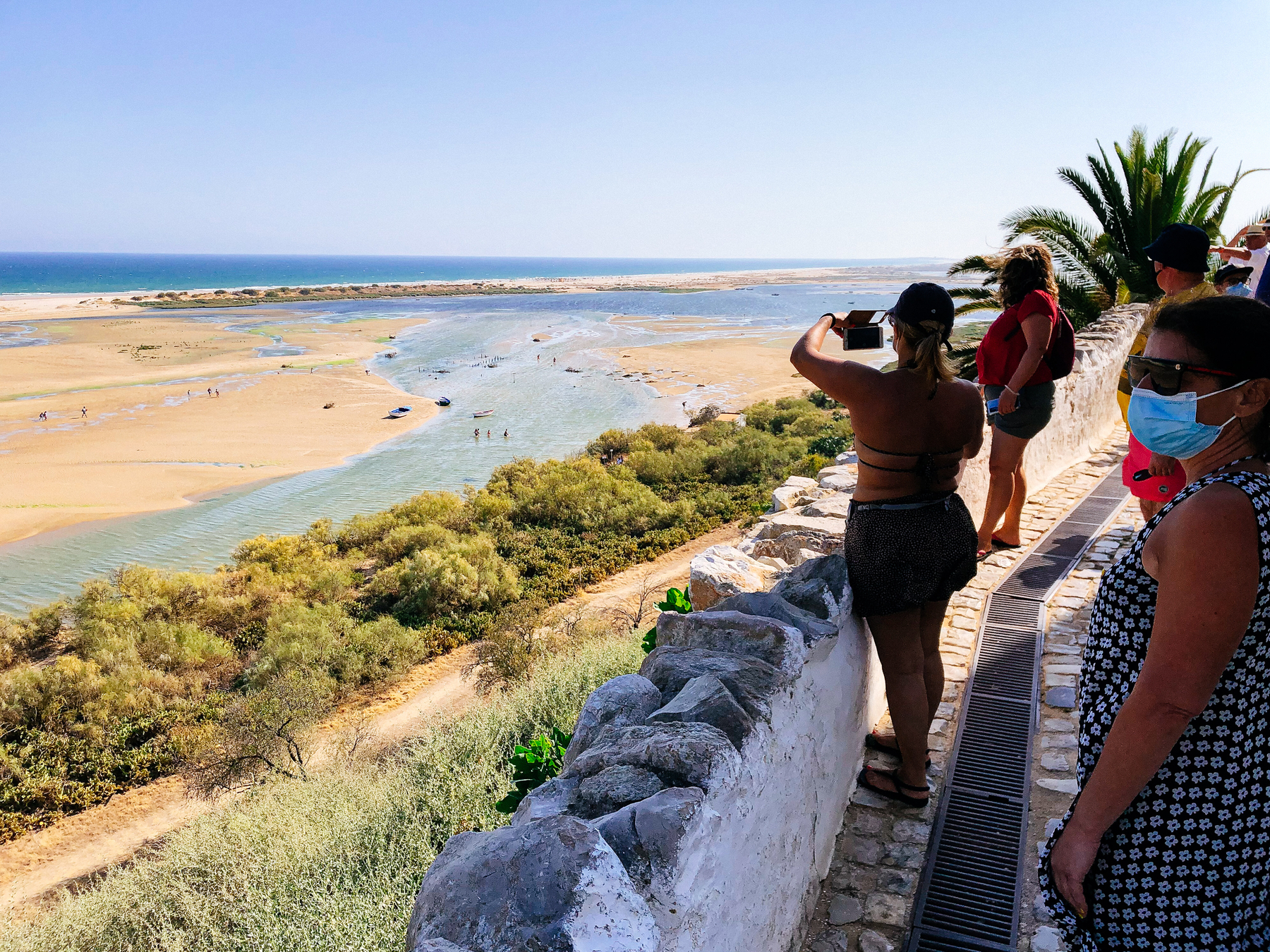 On the other, it also has the most awful construction, it’s way too crowded in the summer, home to some of the tackiest places on earth, has inedible food (if you don’t look hard enough) and Albufeira is in the Algarve. You can find yourself in the nicest place in the country and, 15 minutes away, you’re in hell.

I guess that goes for most places, if we’re being fair, but the Algarve has a knack to rub me the wrong way. 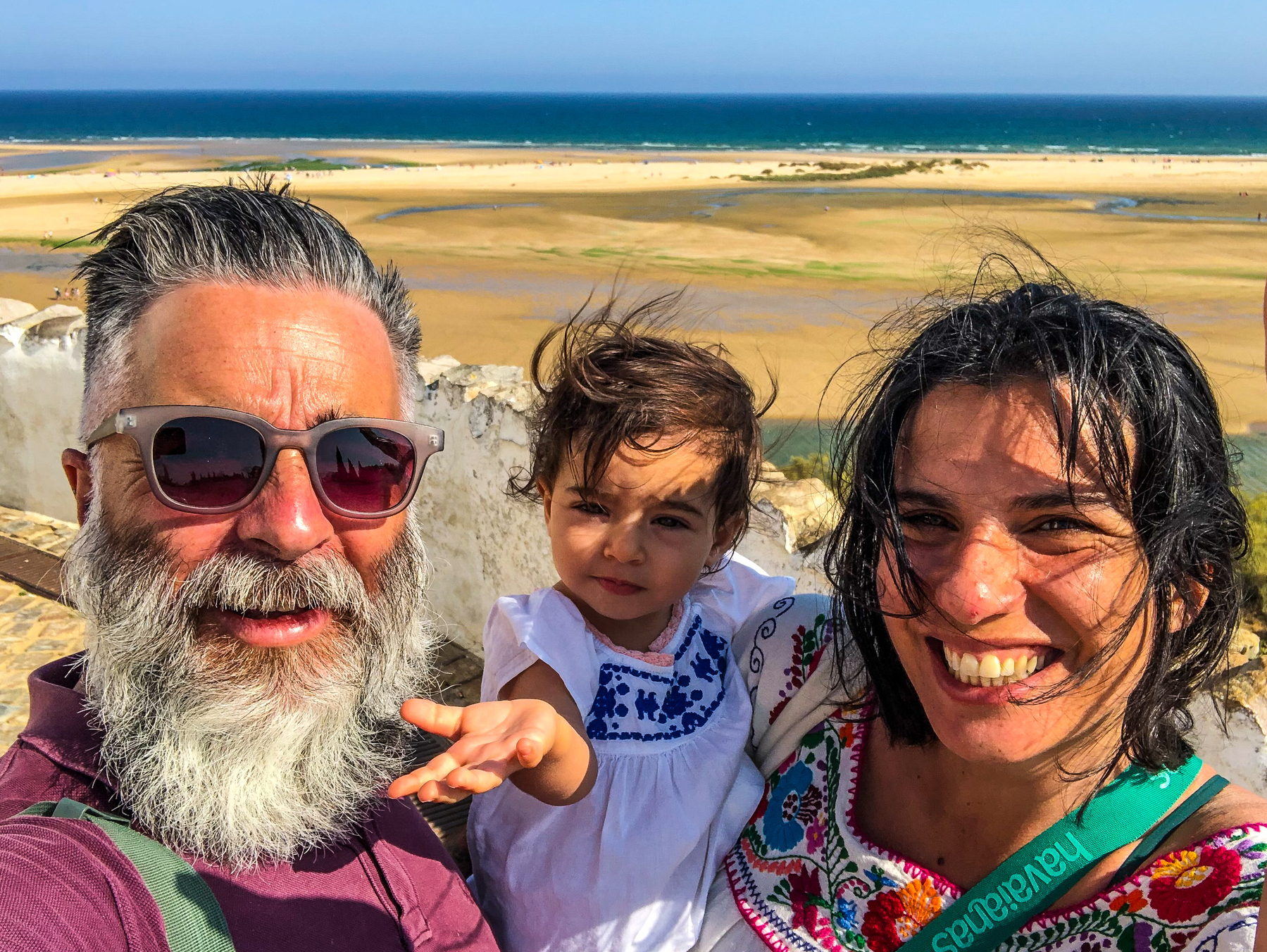 Having said that, when all things are considered, it’s a nice place if you’re looking for a summer vacation, as thousands of foreigners, and locals, will attest. Just make sure you pick your spot(s) carefully.

Seems like everyone used to go there when we were younger, then we started spending more time abroad, at about the same time the tourists started coming over. It got a reputation as an expensive place that catered mostly to foreigners, and that stuck for a while. I’m not even a beach fan, unless the beach ticks a lot of boxes, and it’s hard to find that particular stack of boxes here.

Anyway, tinyMovieStar needs her vitamins, so we found ourselves in the southern part of the country. 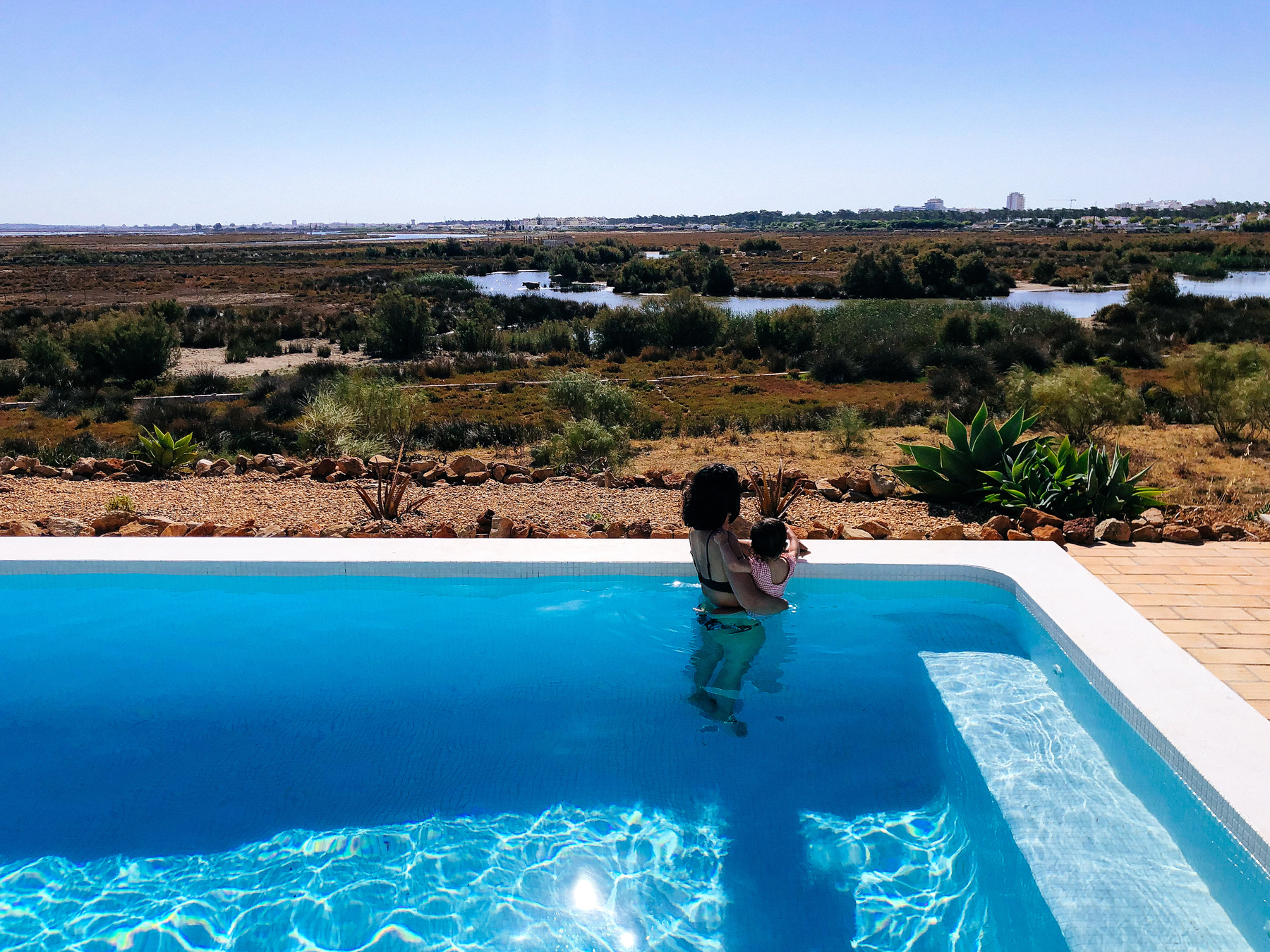 We found our awesome cabin on a friend’s Instagram, and we were glad we did. As far as cabins go, this one was very close to perfect. We decided to cancel the trip to Greece, and the cabin showed up a couple of days later. Things always seem to work out.

The location was amazing. Close to a few good beaches, places to eat, shops to buy supplies, and right next to Spain, for the welcome change in pace and (much) cheaper gas for the car. And away from everything else. No other houses close by, no roads with traffic sounds, nothing. Just us and the view. 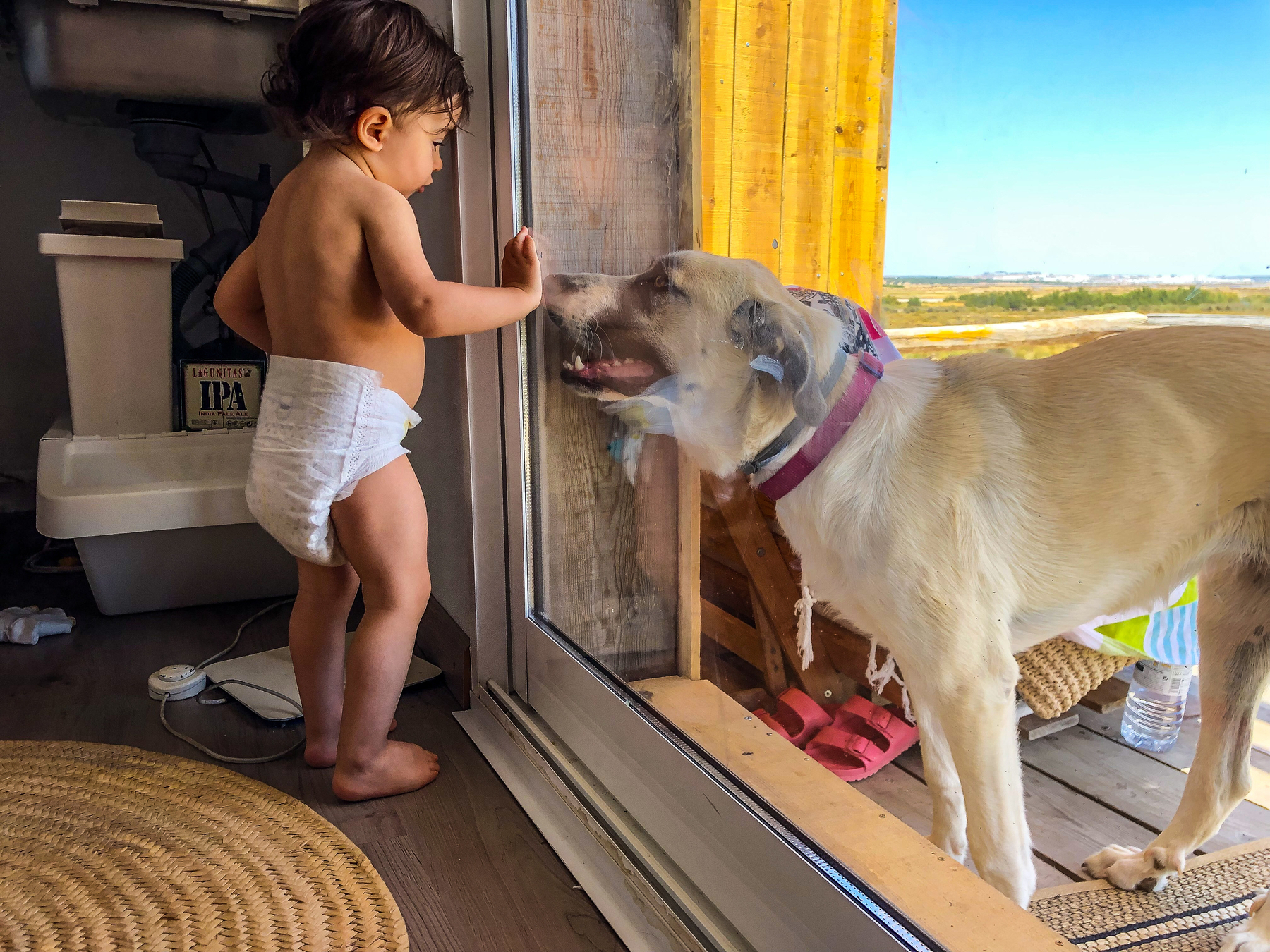 Our bedside view had a bunch of flamingos every morning, afternoon and evenings, as well as other bird species. The property sits right on the edge of a natural reserve, so we got that as view, we could see as far as Spain.

The pool was 10 meters away from the front door, with a couple of cute banana trees on the way there. It was big enough, deep enough, comfortable enough. Our hosts were as nice as people can be, asking in advance if we’d need some special arrangement for tinyMovieStar, and welcomed us with open arms.

Quiet was the word. Not a sound, except the splashing water and the birds. Oh, and cows in the morning. 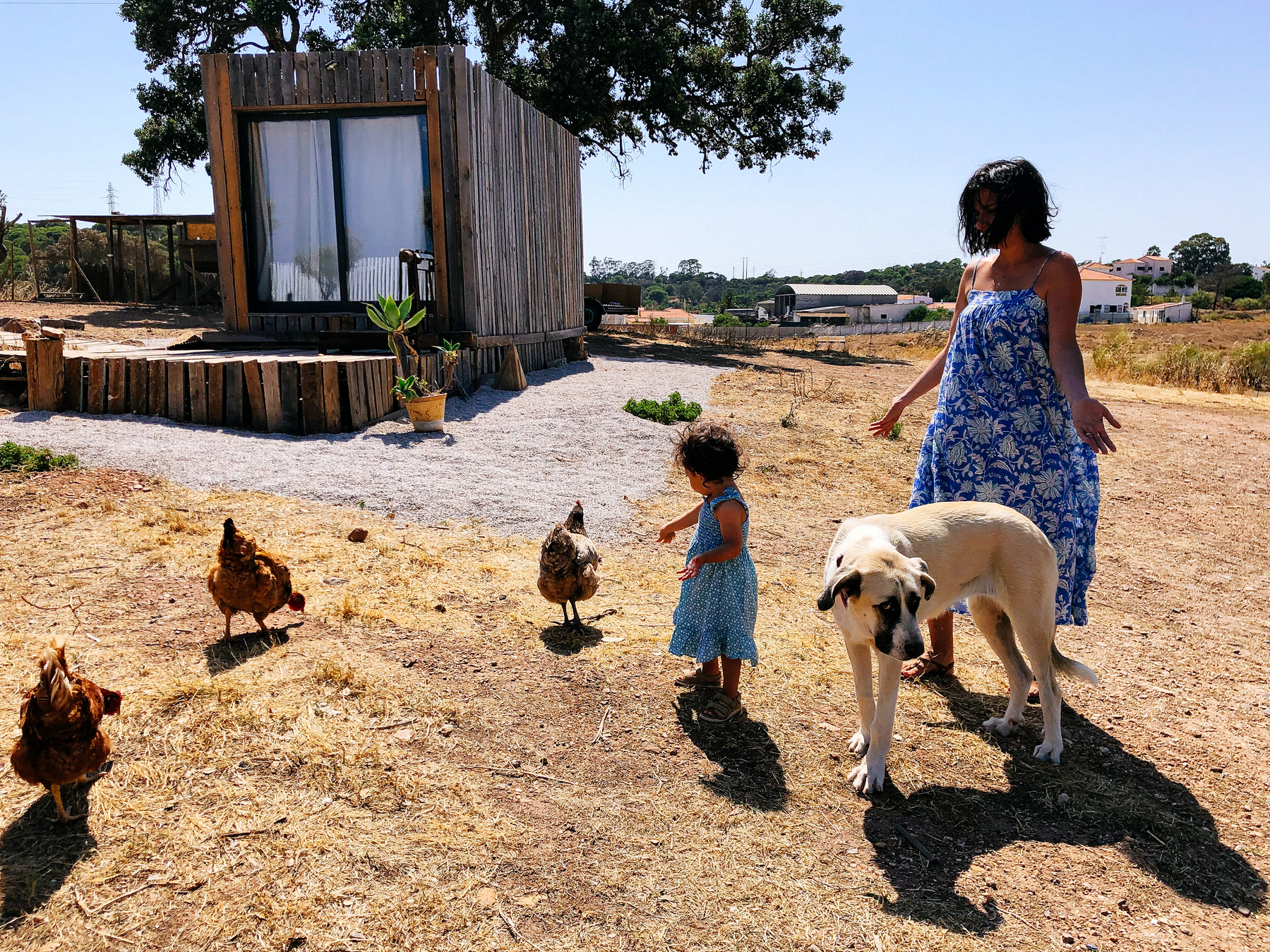 Being a city girl, and a Covid Baby at that, this was the first time tinyMovieStar saw cows, as well as chickens. And we also had a couple of dogs keeping us company 24/7, and a cat that showed up twice a day for her daily dose of snuggling. The little one was happy. All the time. That’s the important thing.

She also came back home with a handful of new words, and names of all the animals. And we’ll never forget the face she made at the chickens while going “Ovo? Ovoo?? (Egg? Eggg??)”… She ADORES eggs!

When we were done with our breakfast and morning pool session, it was time to wander. We could go to one of the many many beaches around, or pick a town and stroll around. We had enough days to do both. 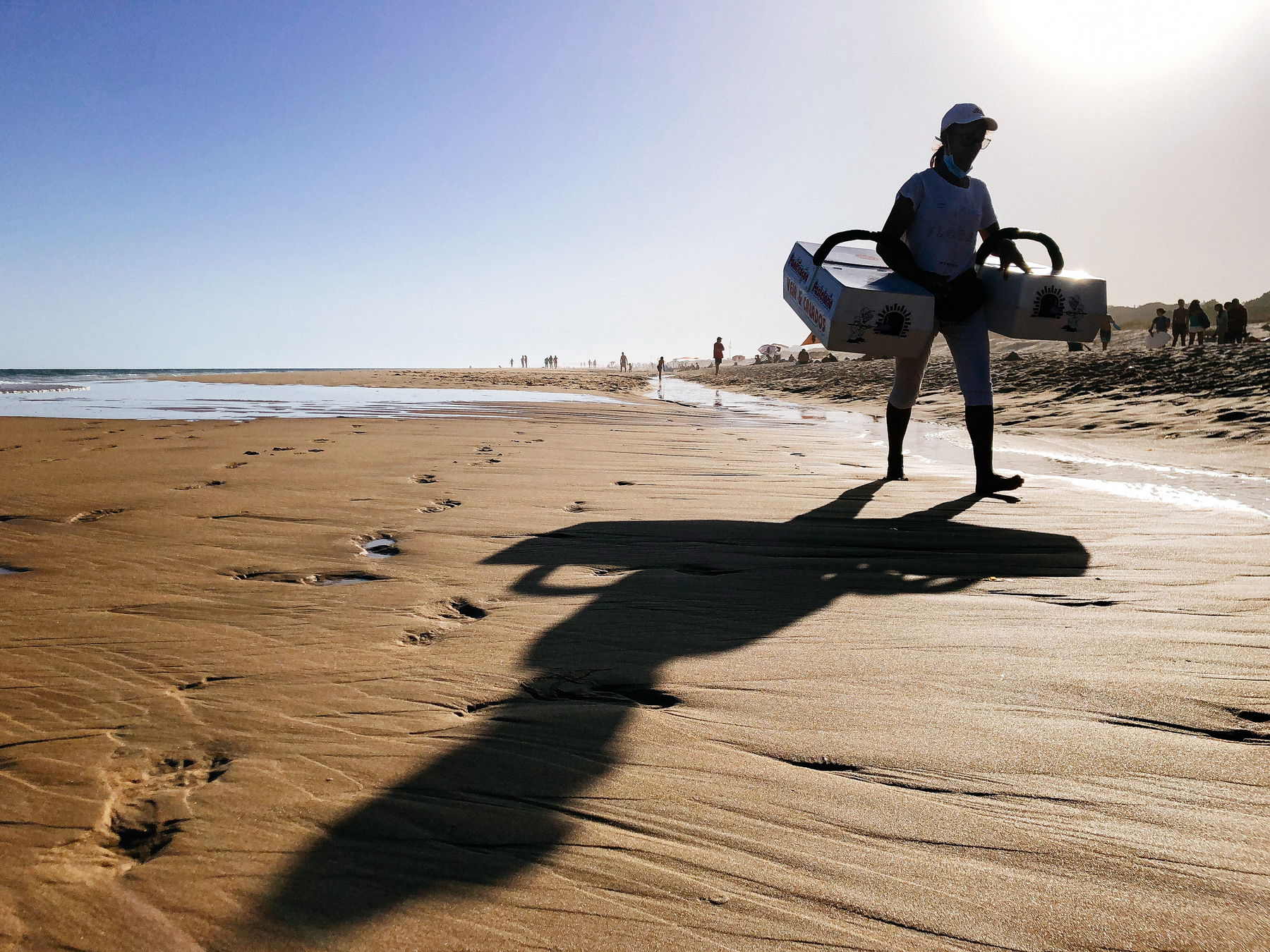 Parking can be tricky at the beach, but we struck gold this time. Access to a private parking at the beach. Most beaches have a concession, complete with bars and restaurants, and a spot where cars can park. They’re packed full most of the day. We ended up at a part of the beach where the bar closed years ago, and the land where it stood is private property. There’s a gate on the road, and no one goes there unless they’re willing to walk. Some still do, but not many. But we could go in and park the car. Unfair, maybe, but a godsend when you’re carrying a toddler and all the support equipment. 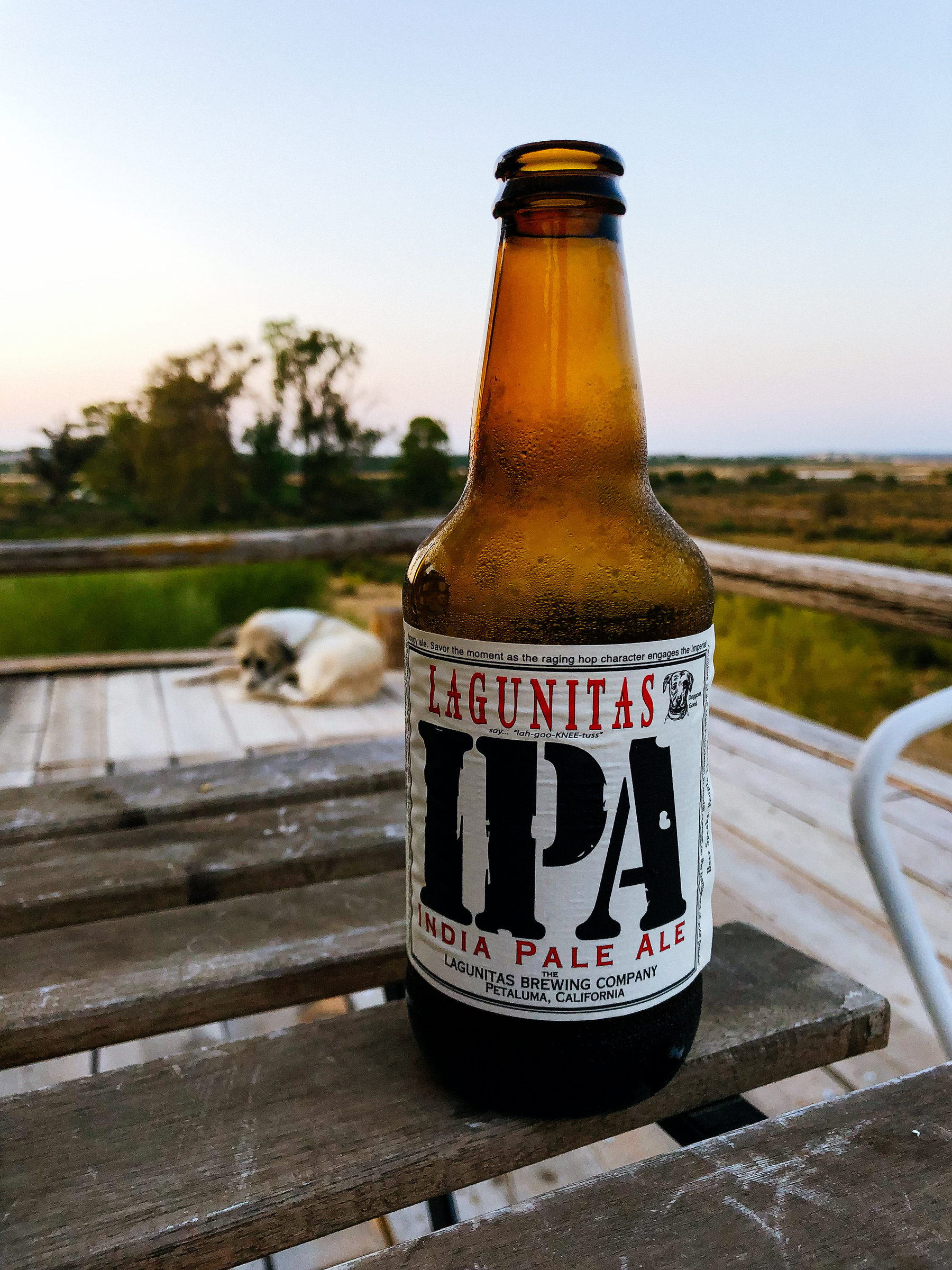 We hit the jackpot again, and my gang was all down south at the same time!
Nuno going around the whole south on a camper van, stopped by for a couple of days; Pedro at a lovely XVIII century family farm, joined us one day and we went to him two days later; Mansinho on his final days at the beach, came over with gifts of shellfish. It was great to have our friends close by, and we managed to see them all. Also one brother-in-law, spending a few days down south, met us for lunch with his girlfriend. On one of the towns we visited we met movieStar’s cousins, by chance. They live there, but we weren’t even looking for them.

We ended up in Spain a couple of days, had some beach time, time to visit a few towns where we hadn’t been in decades, and had a few good meals.

Our great host gave us some tips about nice restaurants in the closest towns, and we had lunch at one of them on day one. We loved it so much, and they way they handled the little one, we went back a few days later, and used it another time for take away. The soup was a success with tinyMovieStar (as well as the omelette), the seafood a hit with movieStar, and I loved the meat. Plenty of iced beer to go around too. 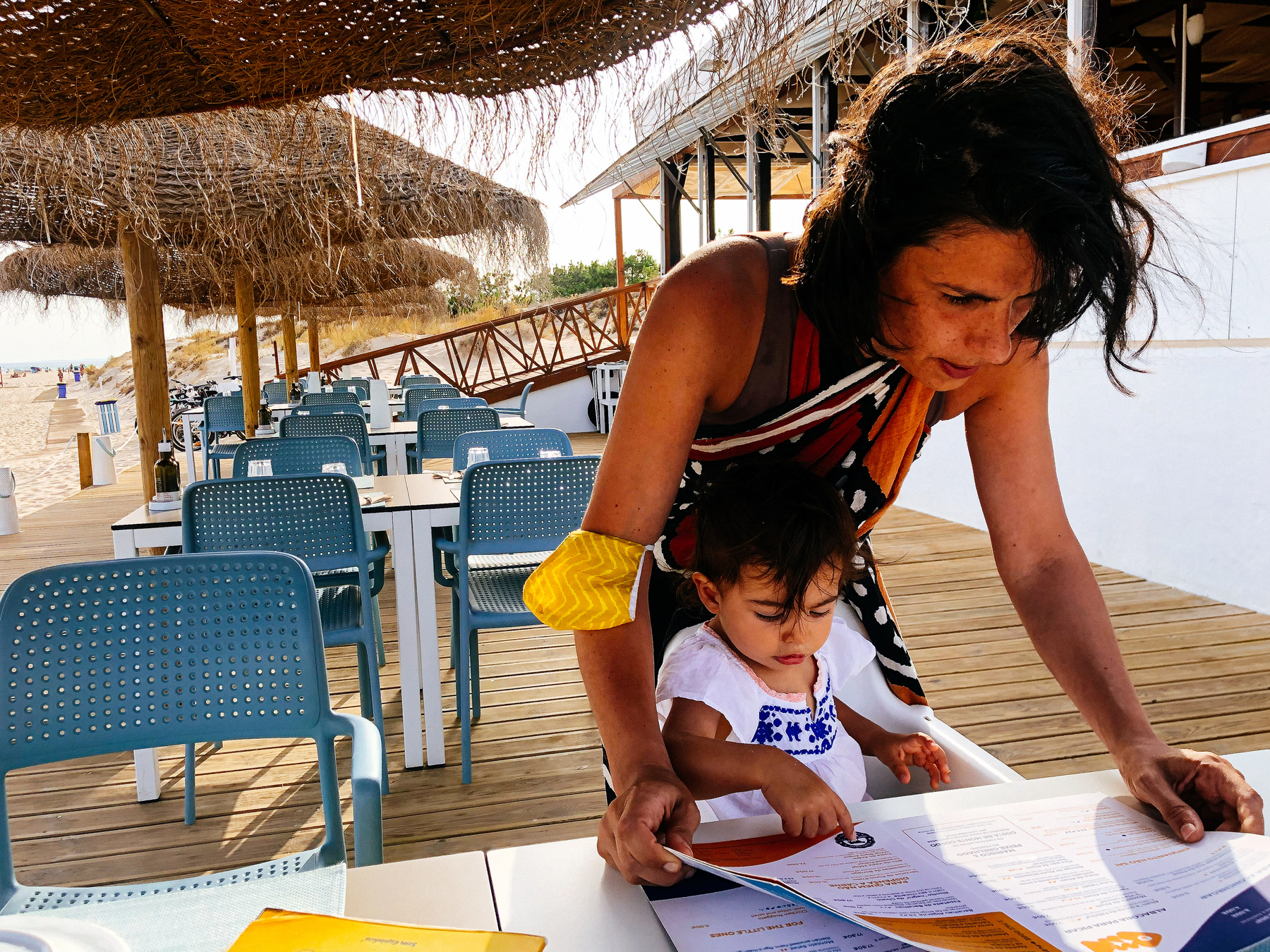 The days went by, we had our routine well oiled, and managed to have a glorious final dinner at the beach, in a lovely restaurant.

We came back home slightly tanned, extremely tired, and very happy. Not too bad, right? 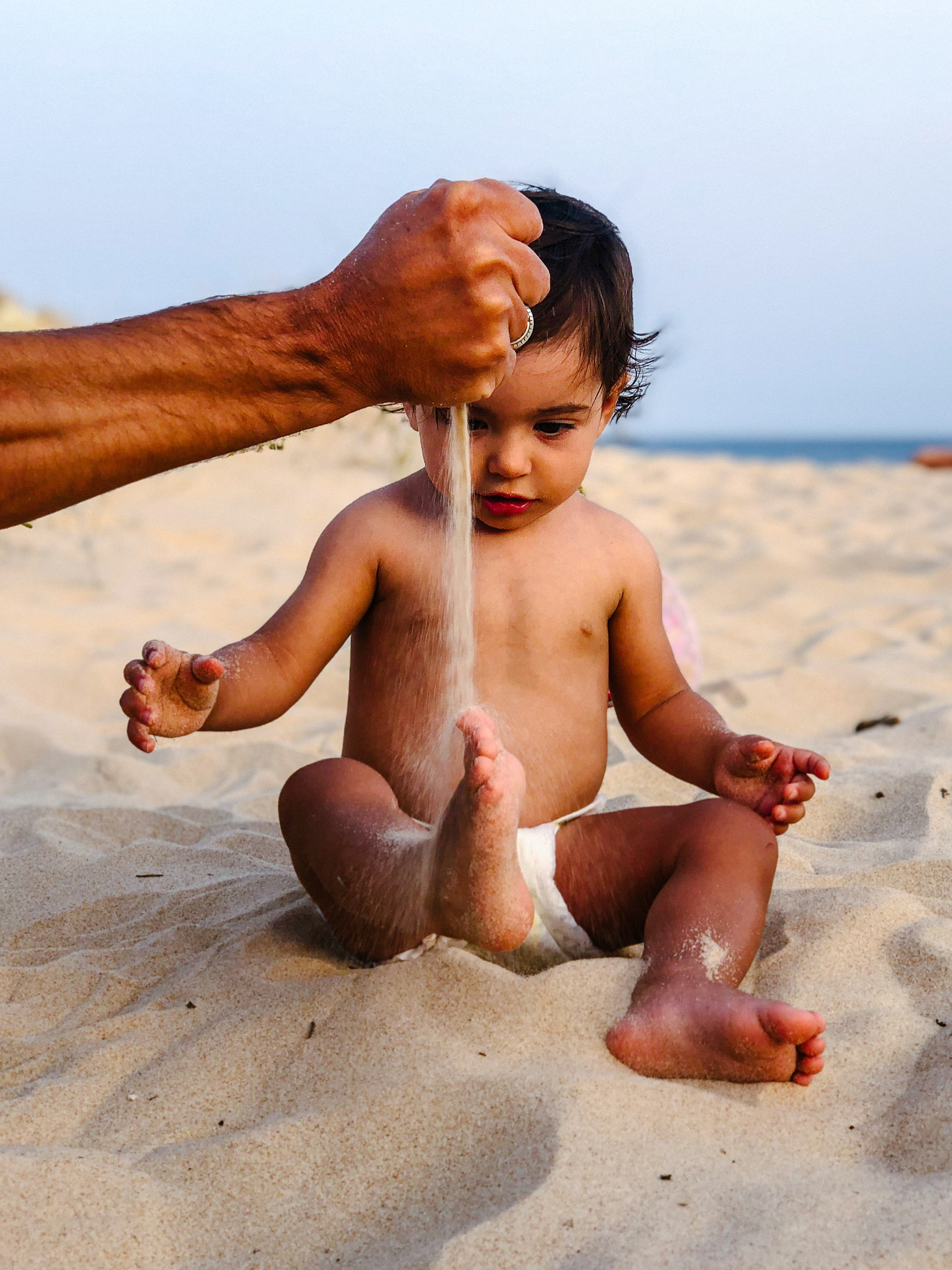 Oh! And we did check the chicken coop one last time, when the car was packed and ready to leave. A dozen eggs were sitting there! “OVO!”

Our hosts offered us six of them, and tinyMovieStar left with a smile on her face. We did too.