Our walks have turned into rides, we’re now using the stroller every day. Less photos, as the hands are always busy with pushing and steering.

Also we don’t go as far as before, this city was not made for strollers. The pavement is awful when one looks closer, and we end up going to one of the many parks available, with plenty of grass to play in, and an assortment of things to keep us entertained in the playground. There’s always a playground. 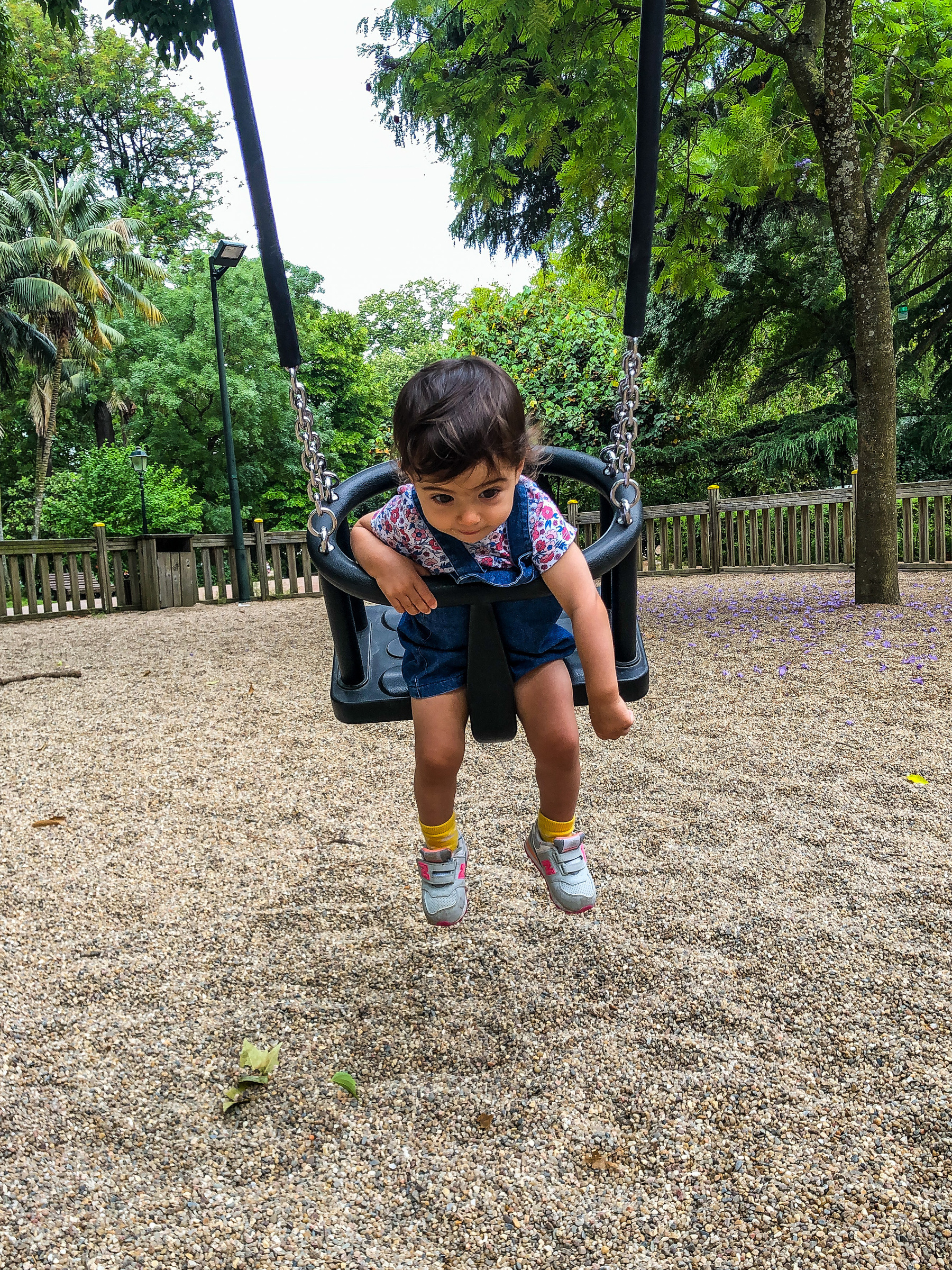 Today we did just that. A little walking in the grass, a bit of pigeon chasing, picking leaves, petting trees, and then off to the playground. tinyMovieStar loves the swing, no outing is complete without it.

Plenty of moms and nannies around, kids all over. We left the stroller by a bench, and came back to it a few minutes later. tinyMovieStar was asking for the baby. The baby is a doll, but I’ve been conditioned to call it baby. “Not a doll, it’s a baby”, or so movieStar has told me a number of times.

The baby was sitting on the stroller when we left, I told tinyMovieStar to go get it. She got to the stroller and started pointing at a nanny with two kids, maybe 10 meters away. I thought she was just curious, so kept asking her about the baby. And she kept pointing at them.

A whole minute went by, and I looked closer. I could barely see it but, the girl who was hiding behind the nanny was holding a doll that looked a lot like our baby! tinyMovieStar was silent, arm stretched.

I double checked, the stroller was empty, the baby had been stolen!

I couldn’t believe it! I called out the nanny and said “That baby is ours!” in Portuguese. She was from the Philippines, couldn’t understand what I was saying, and yet looked like she was about to panic. “No, No,…” she replied in English. I repeated my claim, this time in English and, as soon as the words left my mouth, it dawned on me!

Another nanny came over, turns out she was the one responsible for the criminal toddler! This one was German, taking care of a French baby!

The situation seemed like it was getting to a conclusion, but the French toddler was not willing to let go of the doll so easily, and she cried. In French, I suppose. She was told she had one just like that at home, this one was not hers, she would have to return it… more French tears.

The only one that didn’t say a word until the whole thing came to an end was tinyMovieStar. She just waited. And held the baby tight when it finally made its way to her arms.

I’m always scanning the area where we are, always looking at people getting closer, and the ground looking for trash or dog poo, or cigarettes, whatever. I’m the one who likes to think I’m always on. And yet it was tinyMovieStar who spotted the stolen baby, far away, hidden, when I wasn’t even aware it was gone!

I was so proud of her today. Again.