Prompted by Michael, on Mastodon, I’m reminiscing about that special boozy day in Valladolid. 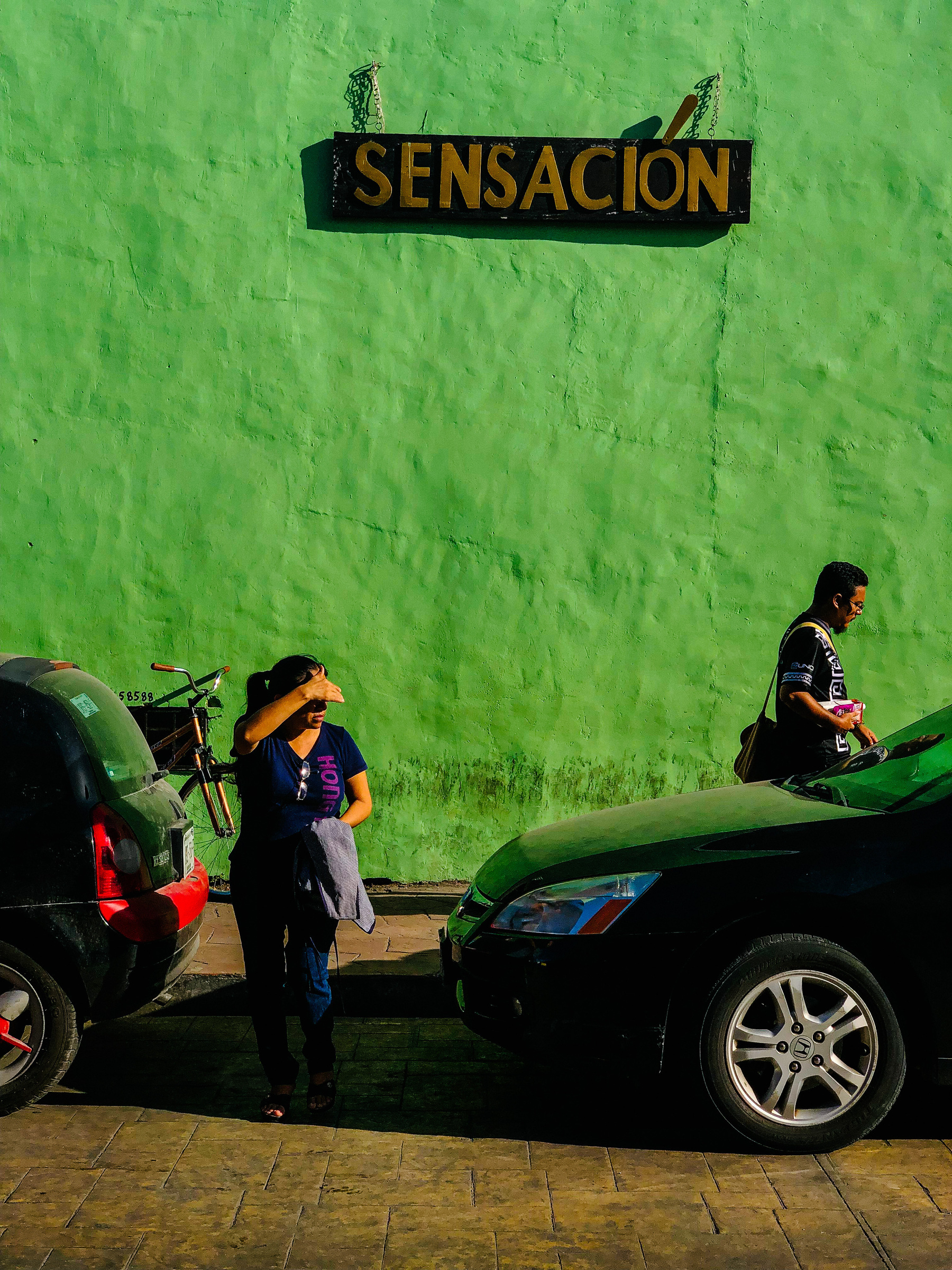 We’d been in Mexico for a few days, slowly making our way down the eastern coast of Yucatán, enjoying the beaches and the food, but it was time to move inland. We were heading to Valladolid. 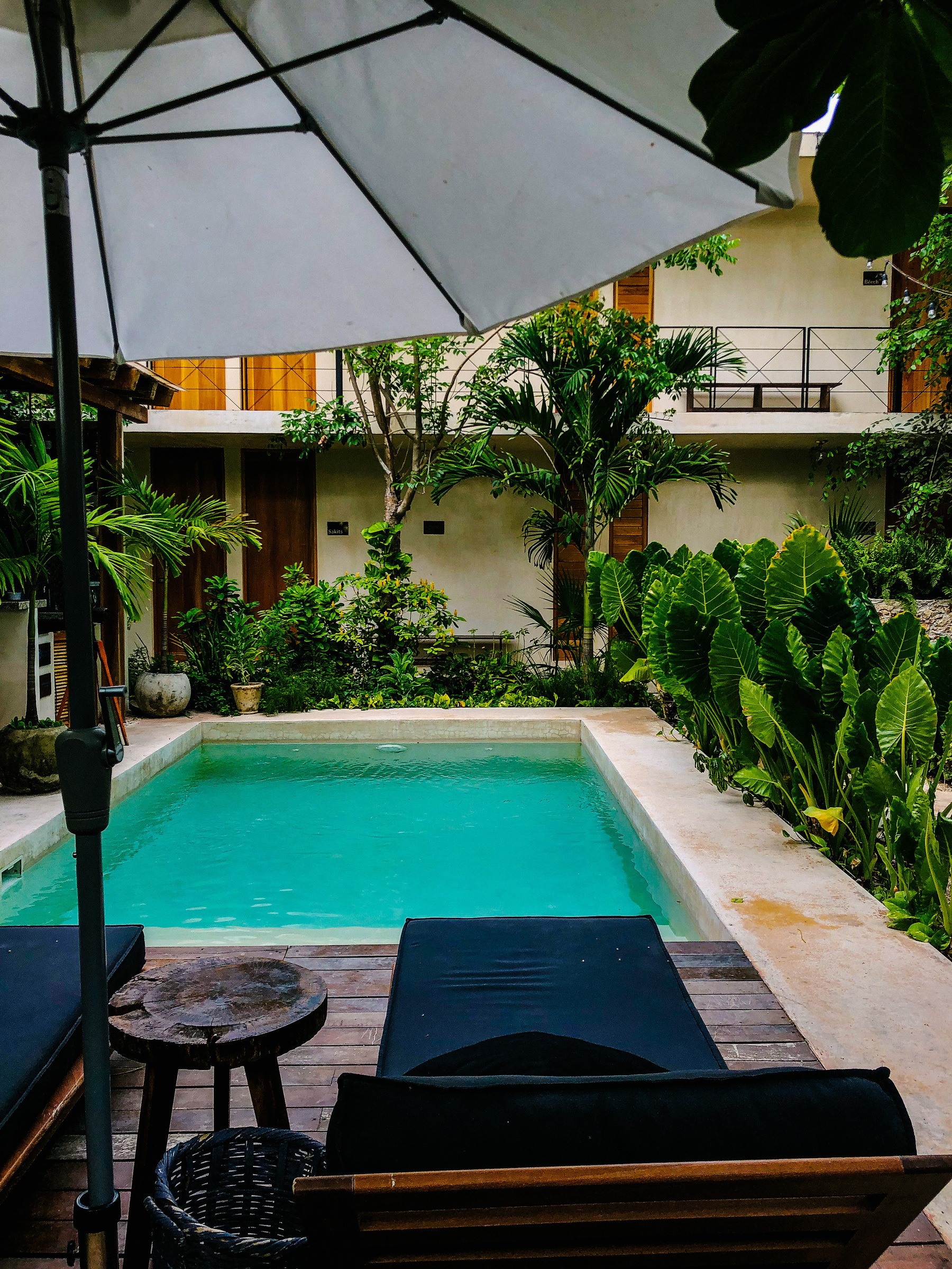 We drove out tiny Chevrolet for a few hours, and parked at what would be our home for the next few days, a cosy hotel near the center of town. We would use this as our base camp, and from there explore the city and a few other spots around it. 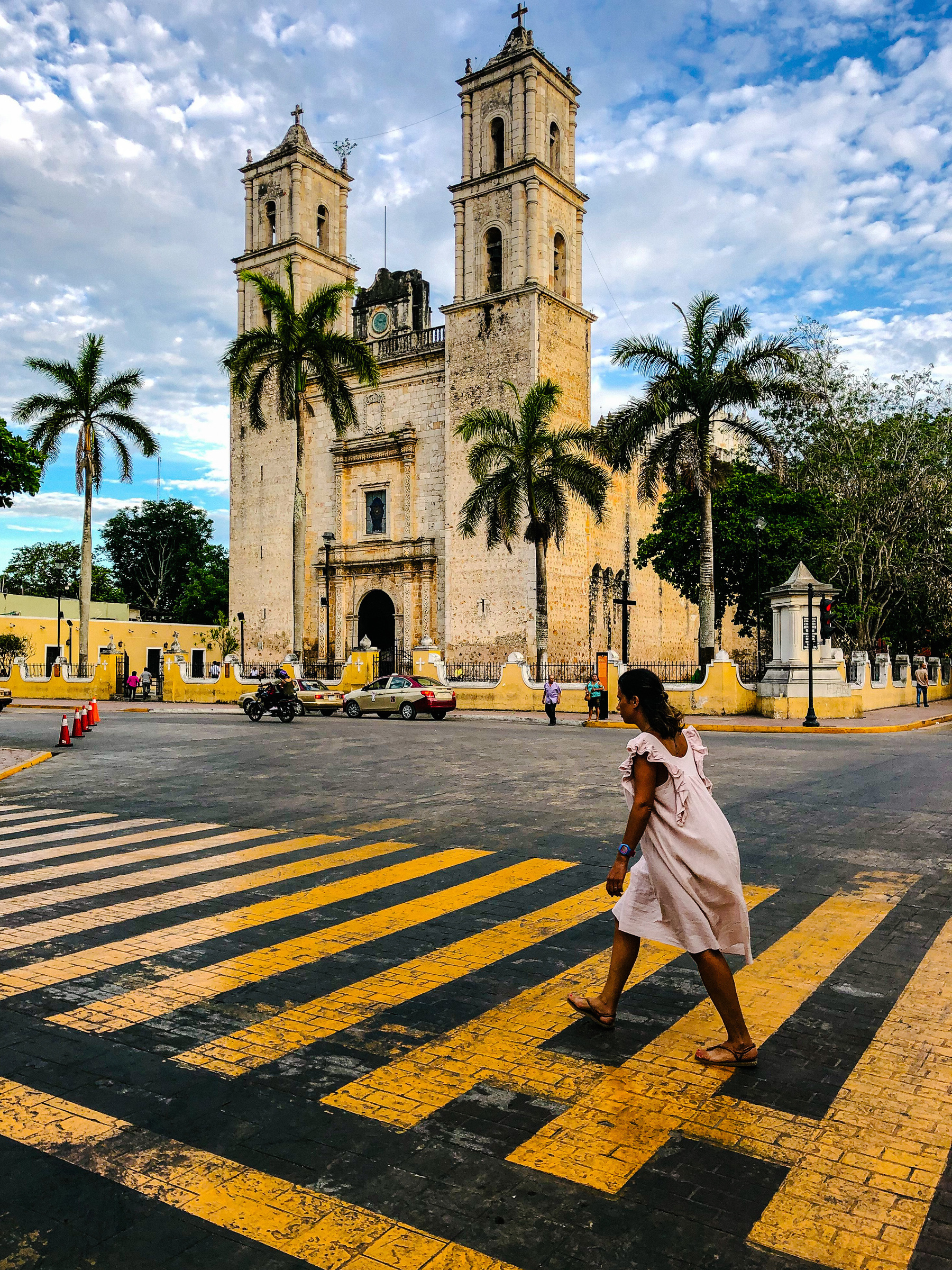 Chichén-Itzá, Rio Lagartos up north, Izamal and Mérida, all within driving distance. I’ll leave that for another post.

After all that sightseeing was done we still had a day left in town, so we decided to visit another cenote. We’d had a lot of fun at the previous ones close to Tulum, seemed like a perfect way to relax and end our stay in the city before moving on to Holbox.

We had a recommendation from a friend who had been in the area, so we decided to spend some time at the one he’d been to. 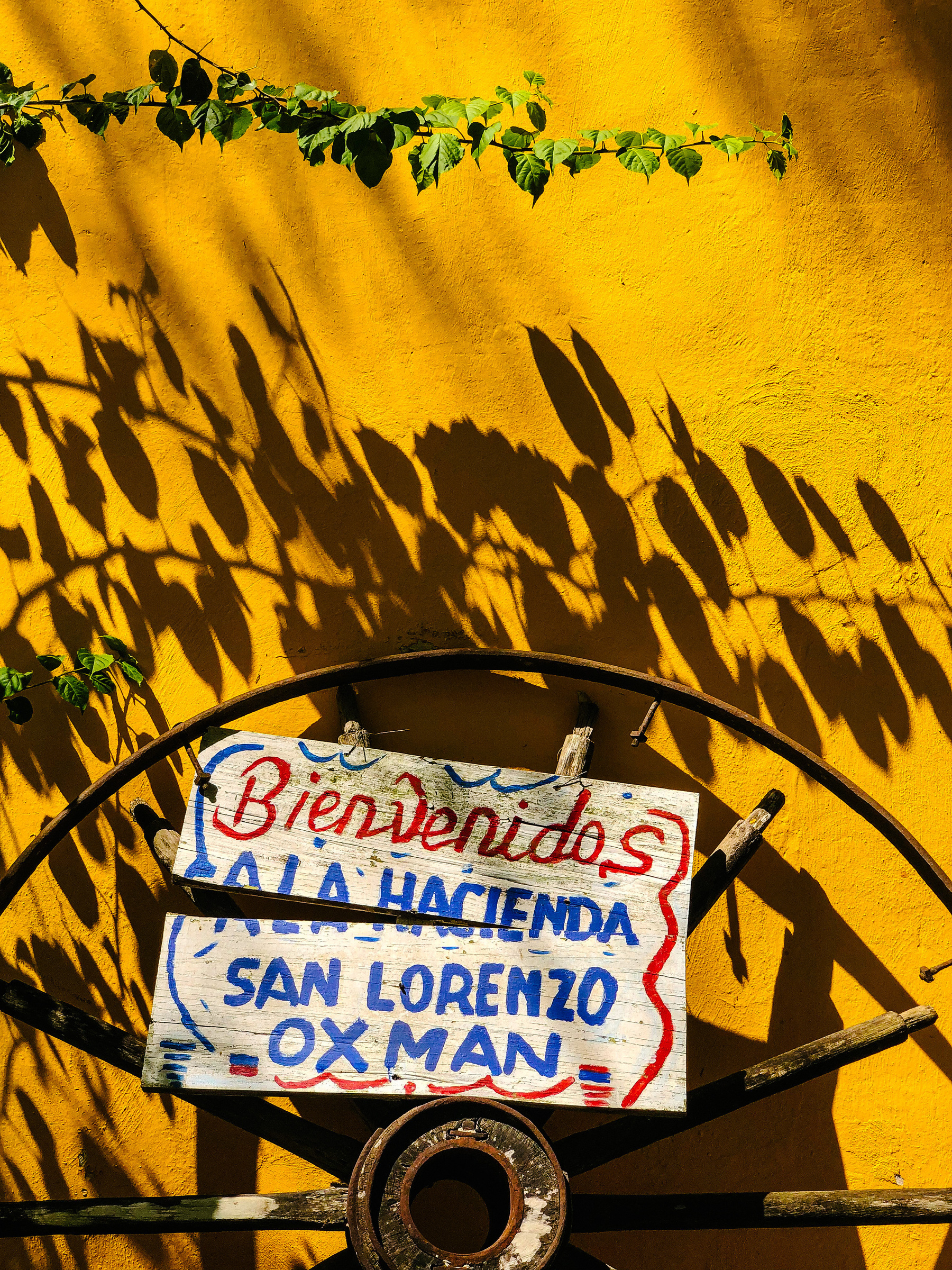 The hacienda is close to town, a bike would be ok, but it was too hot and we had the car with air con, so why complicate things ? We drove there, and were not impressed by the road. It’s mostly a dirt road or, better, a dirty dirt road, but this only lasts for a little while, and you’re soon leaving your car at the parking and stepping in.

Ticket wise we were presented with two options: pay a smaller fee and get access to the cenote, and you can sit at the pool for as long as you want, but are only allowed a shaded spot if there’s no one with a premium tier ticket, or just get that other ticket, still very cheap, and you can have unlimited shade, cenote, and the whole ticket cost can be used at the bar, for food and drinks.

We were planning on staying there for a while, and have lunch anyway, so we ended up getting the costlier one. 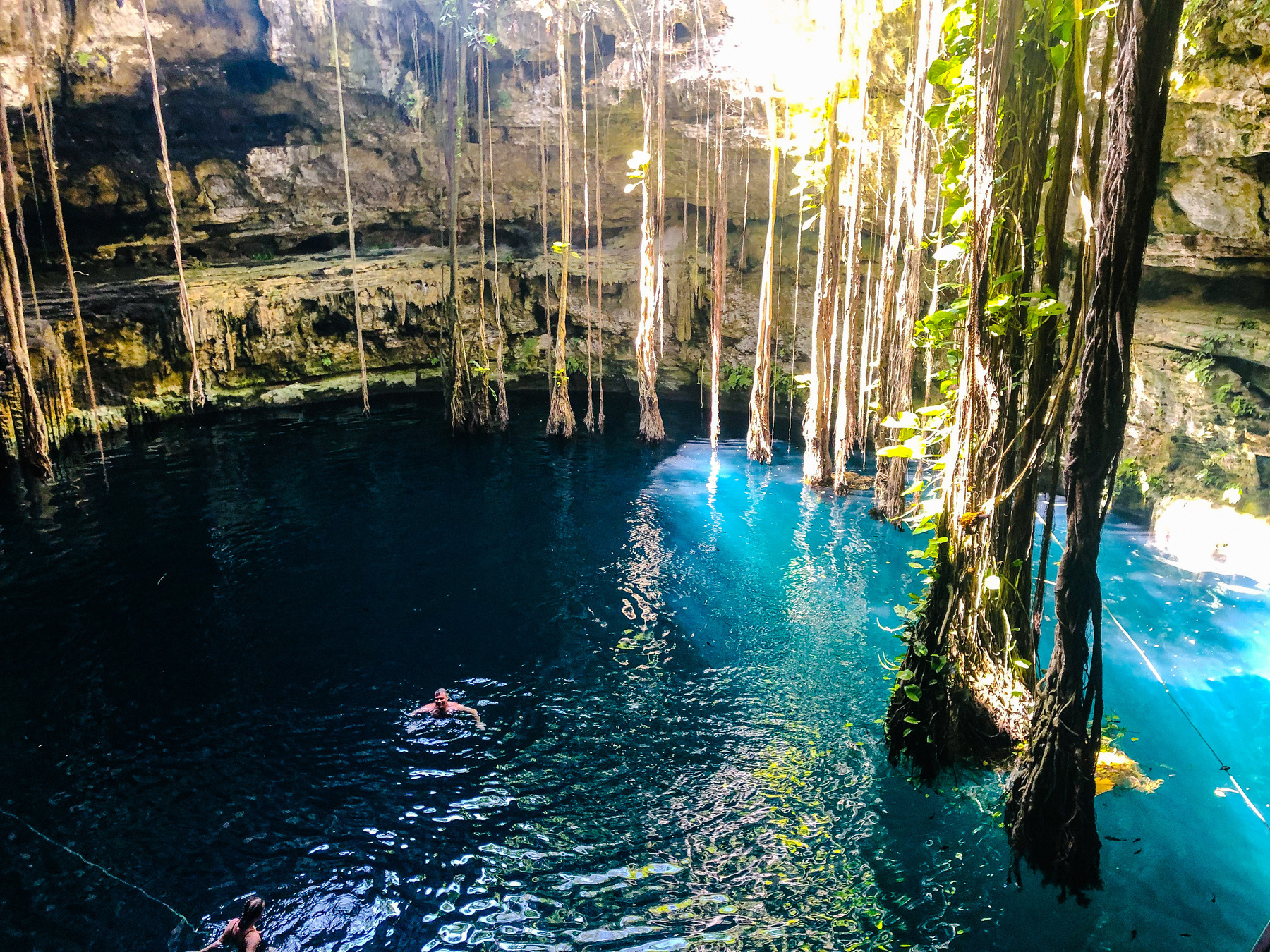 First things first, the cenote. Our previous ones had been open ones, a bit like a pool with some cave parts thrown in, but this was a huge pit. Like a chimney, light filtering in from above, but wide, with crystal clear water, and a big swing to dive in from. We loved it.

It was too hot outside, but the temperature here was perfect, the water cool, and the place near deserted. It was still early in the morning. 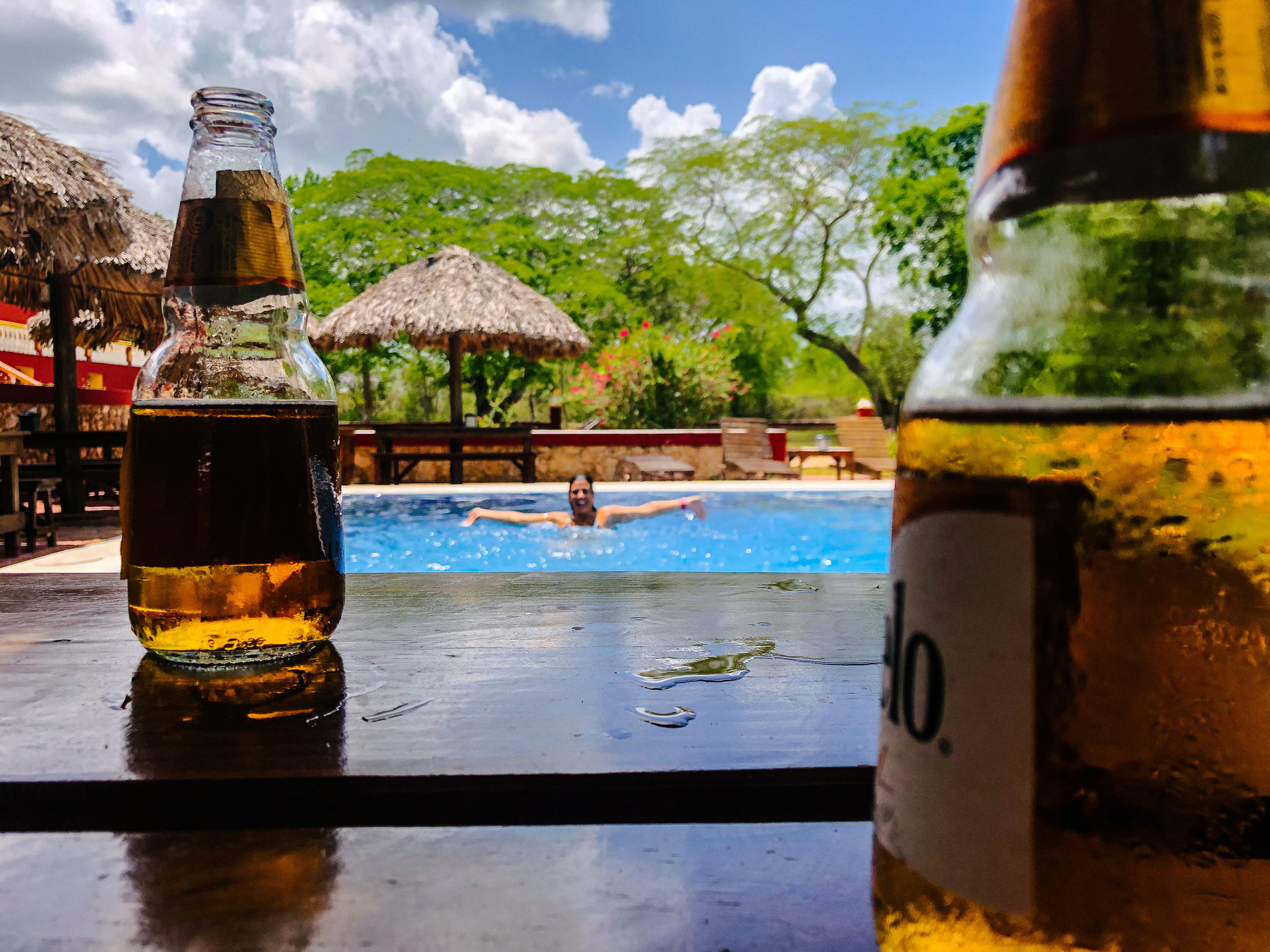 A few jumps later and we moved to the pool. We had the pool to ourselves, and the water felt like soup after the cenote dives.

We sat under one of the umbrellas, still unaware we’d be spending most of the day there.

We asked for a couple of Modelo beers. Time to start redeeming that ticket cost. Beer was cheap, so the tickets would go a long way.

Some food as ordered. Some margaritas as well.

I started Shazaming the music, it was an amazing playlist, perfect for the occasion. We still listen to those from time to time.

Down to the cenote again to cool down. But the pool was still our own private pool. 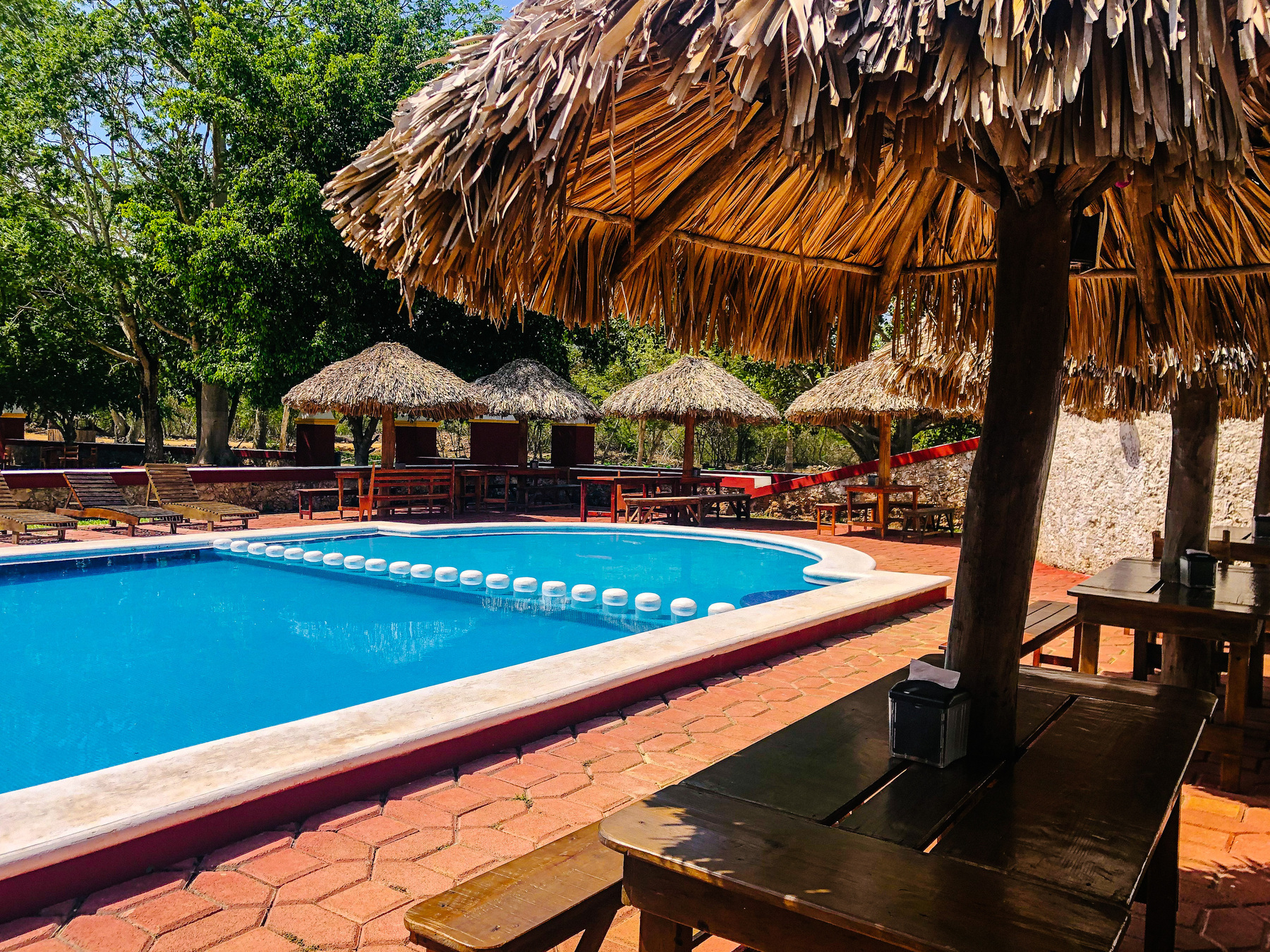 We felt (and this might have been the beer talking already) like Mexican millionaires, enjoying our hacienda, with a caring staff that kept bringing us food and beverages.

After a while we were both in the pool, lounging about, and one of them would walk by and casually ask “Dos más ?”. “Sí, por favor. Gracias.”

Other guest were arriving by now, but still not too many. Most were Mexicans living in the States, back for a vacation, meeting their families and having a good time around the pool, talking about life with the gringos. Everyone was happy to be back home, and the mood on the pool was full of good vibes. 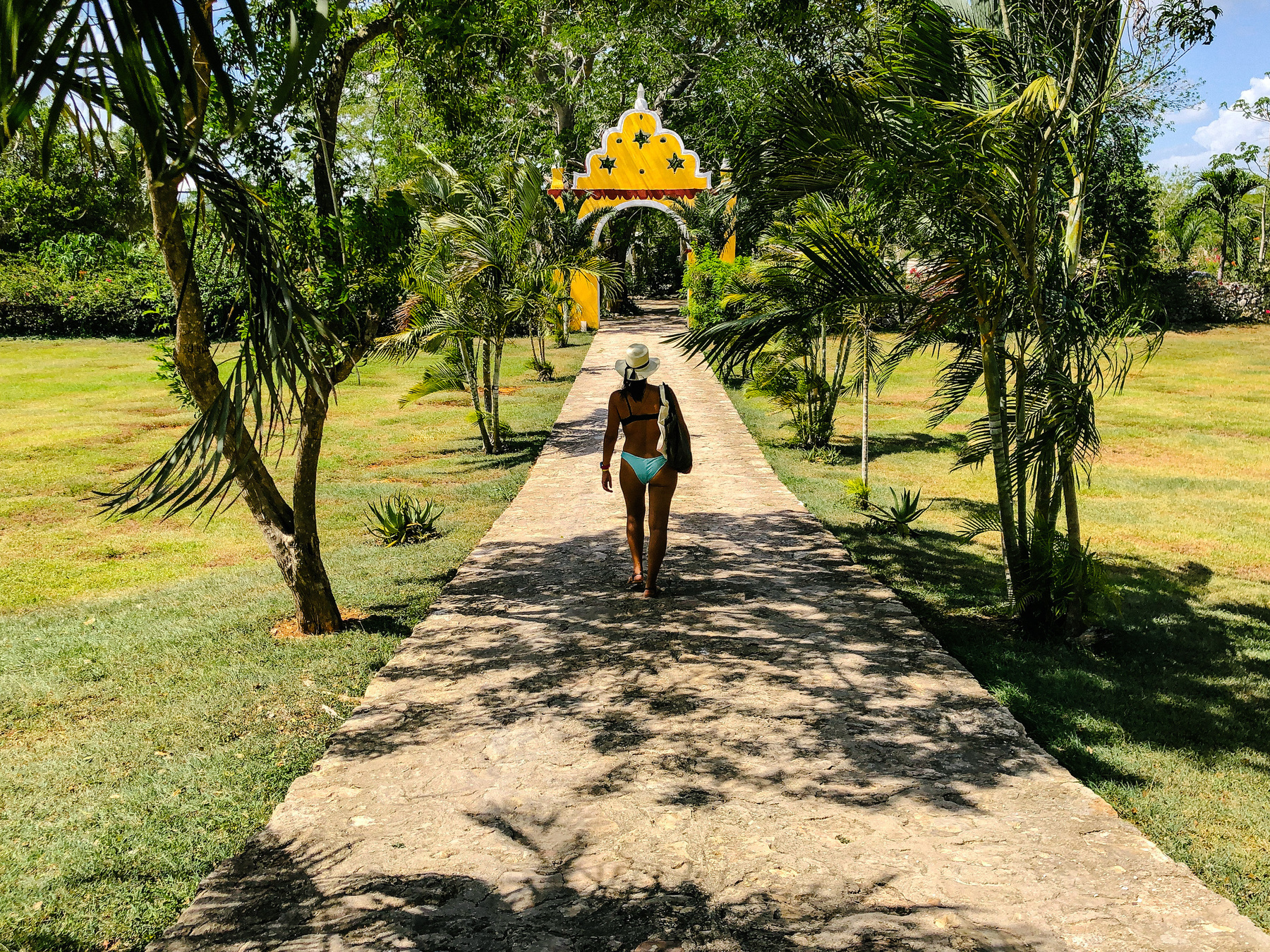 Guess what ? We had a couple more beers, and then had to wait for hours until I was legal for the drive back to the hotel.